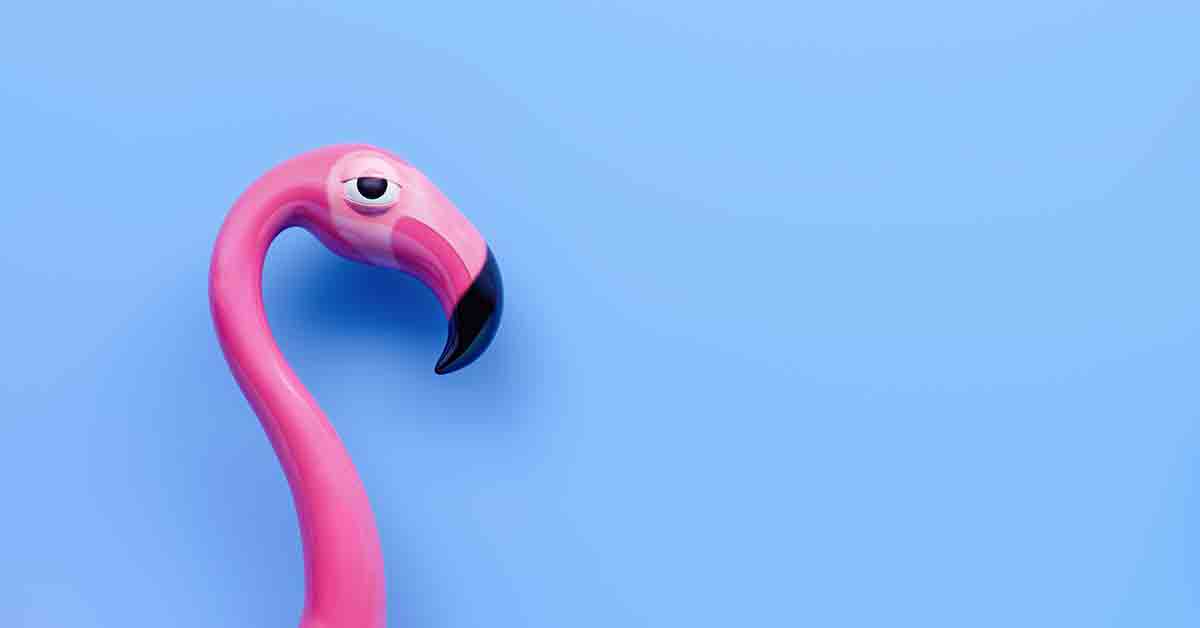 Does Your Landscape Design Include Lawn Ornaments?

If so, you’re in good (and plentiful) company. The tradition of lawn and garden ornaments dates back to Ancient Rome, though the lawn ornaments most popular in America today are nonreligious. In the late 19th century, American yards developed into the open yards seen across contemporary suburban America today. In the 1960s, the new technologies of plastic and fiberglass production boosted the United States lawn ornament industry, which allowed for the incorporation of lawn ornaments in thousands of American yards. The most popular lawn ornament incorporated in residential landscape design in America? Pink flamingos.

While Don Featherstone first designed the pink flamingo that Americans know today in 1957, pink flamingos were popular as early as the 1920s. Fred Schroeder describes these early flamingos as “jigsawed figures with spring-steel necks” in the 2001 book The Guide to United States Popular Culture.

Don Featherstone was an American artist who lived from 1936 to 2015. Featherstone grew up in Massachusetts, and he graduated from the Worcester Art Museum’s art school in 1957. After graduation, Featherstone accepted a job designing three-dimensional animals for Union Products, Inc. During Featherstone’s time at Union Products, Inc., he sculpted over 750 items. The first two sculptures were a girl with a watering can and a boy accompanied by his pet dog.

The “Real” Pink Flamingo’s Origin: On Its Way To American Yards

When Union Products asked Featherstone to design a duck, he bought a live duck and named him Charlie. Later, he released the duck in a nearby park. Later that year, Featherstone carved the now-iconic pink flamingo. Since Featherstone was in Massachusetts and flamingos are native to Southern Florida, he didn’t have a real model to work from. Instead, Featherstone based his design on photographs from The National Geographic. Due to a perfect confluence of events, the pink flamingo went on sale in 1958, at a point in time when pastel colors such as pink, turquoise, and mint were incorporated all across suburban America.

Post-World War II Construction and the Incorporation of Landscape Design

Part of the reason for the rise in the pink flamingo’s popularity in the 50s and 60s was the “sameness” of American suburbia as a result of post-World War II construction. Many newly-developed subdivisions and neighborhoods at the time looked nearly identical. Don Featherstone told the Smithsonian in 2012 that “You had to mark your house somehow… A woman could pick up a flamingo at the store and come with a piece of tropical elegance under her arm to change her humdrum house.”

In 1972, John Waters released the film Pink Flamingos. The movie has little to nothing to do with the popular lawn ornament. The movie’s effect on American popular culture, along with the disdain for “kitschy” plastic figures emanating from Woodstock-era 20-somethings, relegated pink flamingos to “tacky” status. Waters states that, before his movie, “the only people who had [pink flamingos in their yard] had them for real, without irony. My movie wrecked that.”

The 1980s and the Rise (Again) of Pink Flamingos

In the 1980s, Americans regarded the pink flamingo lawn ornament as more of an ironic upper-middle-class joke than as a working-class lawn accessory. Some people viewed the iconic yard fixture as a way of “hinting at one’s good taste by reveling in the bad taste of others.” However, in 1987, the thirtieth anniversary of the first plastic flamingo, Union Products incorporated Don Featherstone’s signature on the underside of the “official” pink flamingos. From 1987 to 2000, Union Products sold the pink flamingos in pairs. One of the flamingos stands upright, and the other has its head lowered to the ground to mimic a feeding posture.

When Don Featherstone retired from Union Products in 2000, the company stopped producing flamingos with Featherstone’s signature. However, this omission did not go over well with flamingo enthusiasts. In fact, the Annals of Improbable Research (the organization that awards the Ig Nobel Prize) protested the absence of Featherstone’s signature in the form of a boycott, along with the Museum of Bad Art. Union Products stopped producing plastic flamingos on November 1, 2006.

Whether you’re looking to incorporate a flock of plastic pink flamingos in your front yard or need someone to help design and install your perfect backyard oasis, MasterAZscapes can handle all aspects of both landscape design, landscaping, and lawn maintenance. We can even handle artificial turf installation if you want your own putting green in the backyard! MasterAZScapes provides free estimates, so save yourself the time and energy and call us today to get started!

Get your free estimate started today!